Bucket list/shopping list it's all the same thing :p

So what Christmas horses do you want? Here is my Christmas Horse bucket list, the models I just NEED to add to my collection :D

Released in 1997 Snowball was the first Holiday horse.

The 1998 release Snowflake was a Missouri Fox Trotter with a red rug.

The 1999 Jack Frost was the first Breyer model to feature the costumes we know and love (if not a more simplistic version than we see now).

I found a stock image for this one! The 2000 release, I really like the costume even if it is a Roemer!

The 2001 release is a must have one for me. It's a Misty with a harness and cart.

The 2002 releases are a cute little pair of foals with a sleigh.

The year before I started by Christmas Horse collection in earnest this model is a gold Marabella being ridden by Father Christmas!

It's a Brighty in a HAT! Why would I not want this?

In 2004 Breyer released a Holiday play set featuring Stormy and a Jack Russell...again with hats.

I really love the Ashley from this set, she is a really lovely colour. 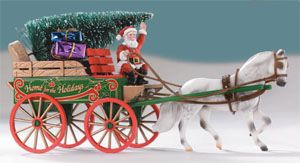 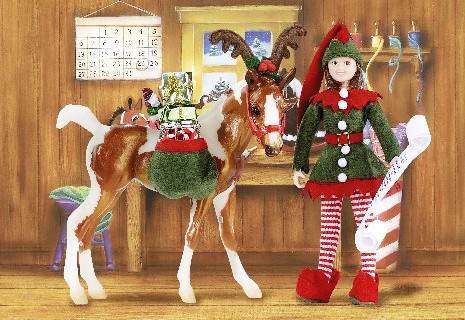 In 2006 Breyer made a really cute play set with an Amber foal and elf.

I do really love these play sets. This one is a Midnight Tango in grey, but it has a very cute plush pony thing.

This one features a Stormy instead and a pony shaped chair!!!

I missed out on getting this silver filigree web special on the Connemara Mare mould.
Posted by Catriona Harris at 16:42 No comments: Links to this post

Why does everything begin with C at the moment. I dunno, my poor little brain can't cope with all these similar names, Celeste, Celestine...

I do like her, but I am poor :( Maybe once I've moved out and back into my own house I can paint enough horses to be able to afford her! Hopefully she'll still be around at the same time as the final Stablemate Club models and they can all come together (as you all know horses get lonely if they travel alone).

She is a silver chestnut on the Hermosa mould:

I love those dapples, I hope I get hold of one with nice subtle dapples :)
Posted by Catriona Harris at 13:05 No comments: Links to this post